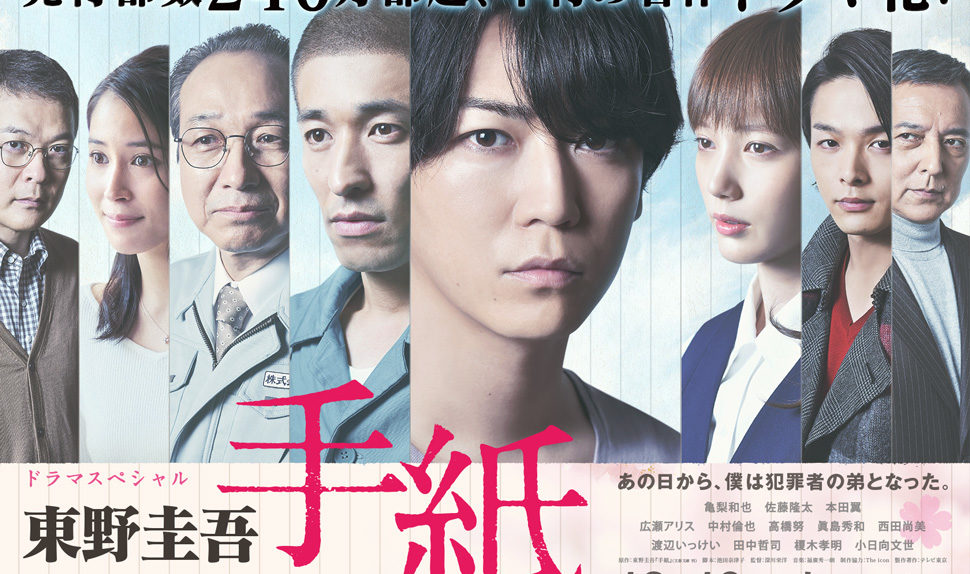 A dramatisation of Keigo Higashino’s novel “Tegami” which has been also made into a movie and a stage play. The hero is the the younger brother of a criminal who suffers discrimination and prejudice from the people surrounding him. He will draw carefully through the brother’s letter exchanged in the movie, the path of his own his family.

4 years ago, Naoki Takeshima’s (Kazuya Kamenashi) older brother wanted him to so badly enter a university that he committed a crime. Tsuyoshi, the older brother, broke into a home to commit theft and unintentionally killed someone in the process. Tusyoshi was convicted of the crime and received a 20 year prison sentence. Tsuyoshi has sent his younger brother Naoki a letter from prison every month since then.

Naoki is now a student in high school and also works. He writes to his older brother that he is doing good, but, in fact, Naoki is experiencing financial difficulties. He is also known as the younger brother of a criminal. Because of his difficulties, Naoki begins to ignore his older brother’s letters.

Soon, Naoki and Tsuyoshi encounter a moment where they have to make a big choice.

RAW version 1 from Turtles and Mountains and more

Thank you very much!

Hi, yes I can help – this has also been uploaded to Nyaa, please find it here: https://nyaa.si/view/1108726
You need to use the jptvts retimed subs.
Let me know if you have any issues!

Hmm I don’t quite understand the ending… T.T but anyway, thank you so much for subbing this SP!! ^^

Thank you so much <3

I really enjoyed this adaptation. The story was perhaps a bit less subtle than the 2006 movie, but this new interpretation featuring some very good performances. I had to retime your subtitles to sync with the jptvts raw. Thanks very much for the subtitles!

Thanks Jefftiger! Interesting to know how it compares to the movie as I haven’t seen it. Also, I always forget to check jptvts – I’ll upload a re-timed version when I get a chance.

Thank you so much for subbing this 🙂

Thank you so much for doing this.

Thanks for sharing. Happy Holidays…