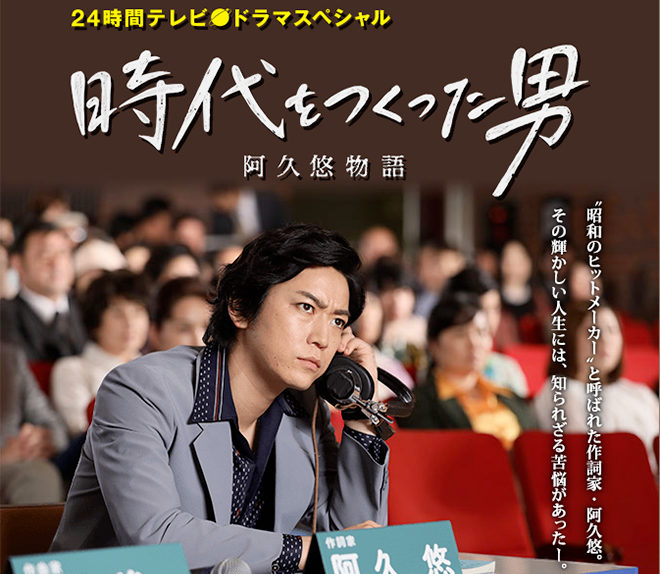 Aku Yu was a songwriter who put out more than 500 songs in his lifetime. His songs spanned a wide genre from idol songs, enka, folk songs to songs for anime and commercials. He was called a hit maker for the many famous songs he composed which added colour to the period. These songs continue to be appreciated even to this day. Aku’s wife Yuko sees female high school students humming to her husband’s songs and recalls the time when she met him… In 1963, Aku, then known as Fukada Hiroyuki, was a salaryman who worked for an advertising agency. That was where he met Yuko. The two of them were similar in character and started dating. They got married a year later. After that, he began working part-time as a broadcast writer without the knowledge of his company and came to use the pen name “Aku Yu”. He eventually resigned from the advertising agency and became a freelance broadcaster because he wanted to write something. He even took on the challenge of writing song lyrics and displayed his talent, making Moriyama Kayoko’s Shiroi Chou No Samba a huge hit. Wanting to produce popular songs which would create an era, Aku made the decision to write songs seriously. He got increasingly busy with work such that he came back home to Yuko and their son Taro once in every two or three months. Then in 1971, Nippon TV producer Ikezawa Fumio called Aku to participate in the launch of a new programme. Ikezawa wished to create a star from the TV station and had the intention of producing a new audition programme. Aku’s ideas were sought and he proposed an unconventional programme format where the entire audition process would be broadcast and open to scrutiny. This was the beginning of the legendary audition programme Star Tanjou! It was decided that they would serve as the judges and Star Tanjou! finally premiered. However, the star contestants whom Aku, Ikezawa and the production crew had anticipated, did not materialise and the programme got off to a rocky start.

Synced to RAW from: iSh4ne